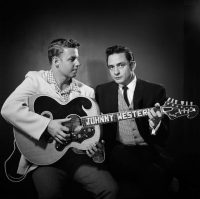 We had an amazing conversation with Northfield, MN native and Country Western star Johnny Western. Johnny grew up in southern MN, had his own radio and TV show at 17 yrs. of age. He put out 3 singles before he left for Holywood, California in 1954 at age 20. That began an amazing career in television, movies, and as a Columbia recording artist. Besides his own records, he played on over 70 Johnny Cash singles, and toured with Johnny from 1958-1965. He also wrote and recorded the theme to Have Gun, Will Travel that was the second most popular cowboy television show behind Gunsmoke. Johnny is an amazing conversationalist and tells the story of achieving his American Dream.