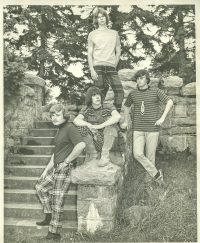 Paul had an incredible interview with musician Walt Rabideau, a rock and roller who started his career in Tomorrow’s Children, a band that started in Paul’s hometown of Virginia, MN in 1966. Walt tells the tale of his start with the Tomorrow’s Children, their gigs and recording 3 singles, before Walt moved to Haight Ashbury in 1968. The story then picks up when Walt meets psychedelic guru Stephen Gaskin. After a cross country trip with Gaskin, Walt ends up as the bandleader of the house band at The Farm, a commune that Gaskin and others started in rural Tennessee when they bought 1,000 acres of land and created what the Wall Street Journal called “the General Motors of the American Commune System.” Walt tells us how the commune was bullt, and after many years morphed what was known as the “Farm Band” in NRS (the Nuclear Regulatory Commission) a rock band playing gigs with the likes of Bonnie Raitt, Jackson Browne, Graham Nash, and others protesting the Nuclear Energy politices of the U.S. Government. It is a most fascinating story illustrating the nascent beginnings, and accomplishments of over 200 folks seeking an alternative American Dream.